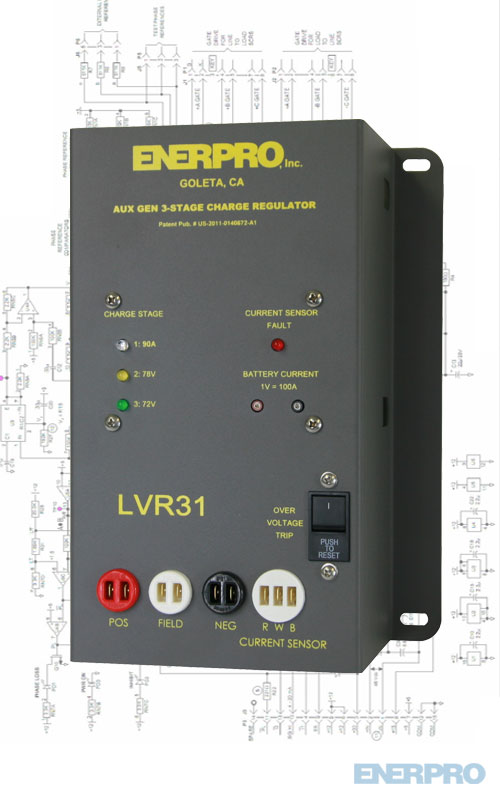 VR31 module
The VR31 module is a direct replacement for the VR10-16 series auxiliary generator voltage regulators. Locomotives equipped with the DVR300 voltage regulator require an additional mounting cage and wiring harness adapter for installation. The VR31 uses auxiliary generator voltage feedback, like the VR10, but also uses battery current feedback to provide optimum battery charging. The current sensor provides feedback required to limit current at the start of the charge cycle and to determine when the battery is 95% charged for transition to the float stage. VR31 design incorporates several failure mode protection features that ensure high operational reliability.

Loss of Current Feedback Protection
If the current sensor fails or the current signal to the VR31 becomes shorted or open, the VR31 immediately transitions to the 72V float voltege. A current sensor fault light on the VR31 also lights and an output signal is sent to the locomoitve. This fail-safe feature protects the battery from overcharging while still allowing the locomotive to operate until the next maintenance cycle.

EBCS-3 Current Sensor
The EBCS-3 current sensor is installed on the BTN battery cable directly behind the knife switch. By providing isolated battery current feedback to the VR31, the system is able to provide proper charging irregardless of load switching. The EBCS-3 is powered from nominal 74V output of the Auxilliary Generator and has built in failure detection and fail-safe circuitry.

Three-Stage Charge Profile
Air pollution regulations and high fuel costs have made locomotive operators shut down idling locomotives much more frequently than in the past. This change in locomotive operation has resulted in premature loss of battery capacity and more frequent cell failure rate. These problems are caused by the single-stage charge profile provided by conventional chargers. With single-stage charging, the initial current immediately after engine start is limited only by generator output and battery circuit resistance. Most locomotive battery charging circuits incorporate a current limiting resistor to reduce the charge current. Even with this resistor, the initial current can greatly exceed the battery manufacturer’s recommended maximum charging current and shorten battery life. The single-stage charger transitions from the high initial first-stage current when the battery voltage rises to reach the nominal voltage setpoint of 74 V. The single-stage charger then maintains constant nominal 74 V on the battery until the engine is shut down. According to battery experts, 74 V is insufficient to convert all of the battery’s active material during the engine run time if the engine is shut down several times per day. The result is a progressive loss of capacity.

The three-stage charge profile produced by the VR31 regulates the first, or Bulk Stage, current to 90 Amps. In the second, or Absorption Stage, the rectifier voltage is regulated to typically 78 V for an FLA battery and 76V for VRLA. This elevated voltage converts the maximum amount of active battery material while equalizing the charge in each cell, thus minimizing sulfation and capacity loss. In the third, or Float Stage, the VR31 reverts to a constant-voltage regulation mode (nominally 72 V).

Bulk Stage
After engine start, the unit enters the 90 A constant-current Bulk Stage. The battery behaves as a capacitor in that the constant charging current results in battery voltage increasing linearly with time. The Bulk Stage ends when the voltage reaches a converter-imposed limit of 78 V (FLA) or 76 V (VRLA).